We have been working on and off over the last 6 months to potty train Parker.  It has definitely been an uphill battle.  He seems to understand big boy undies, he knows not to pee in his Superman pants but we just can't seem to get him to poop in the toilet.

Kevin and I have both spent hours sitting on the bathroom floor, pleading with him to poop in the potty and assuring him that the potty won't hurt him.  His response, "the poopies won't come out".  I'm fairly certain we are more aware of Parker's poop patterns than what's going on in the news.

He spends most of his weekends in big boy underwear but when it's time to poop, he politely requests to change into a diaper.  Nothing has seemed to work and our bribes to give him "all the toys in the world" have fallen on deaf ears.

Until recently...We finally closed on our new house and at the neighborhood market, there is a bright and shiny white mechanical horse.  Parker has begged and pleaded to ride this horse.  I realized this might be my chance for a potty break through and I took it. I promised Parker that as soon as he pooped in the big boy potty, he could ride the horse. We have been talking about this horse for weeks, until yesterday.

Yesterday, at Mrs. Terri's, Parker pooped in the potty and last night, he got to ride the shiny white pony. 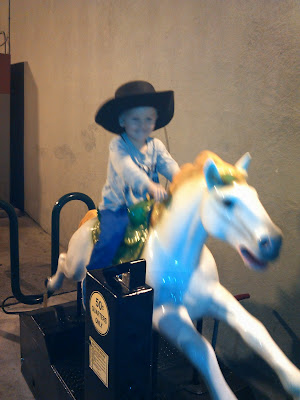 The joke was on me.  Parker insisted on wearing his cowboy hat.  Keep in mind, this was during rush hour at the grocery store and the machine plays a loud song, during the ENTIRE ride. Poor Kevin had to sit in the car with Cooper, while Parker took his ride. Embarrassing or not, if this trick works, I will gladly watch him ride the pony in his cowboy hat while the music blares.

the Worleys
stockton, ca
Kevin and I are enjoying married life in Stockton. We are settled and life here really feels like home.We are the parents of two wonderful little boys, Parker and Cooper and our sweet baby girl, Hadley.

This is our life: the good, the bad and the boys.