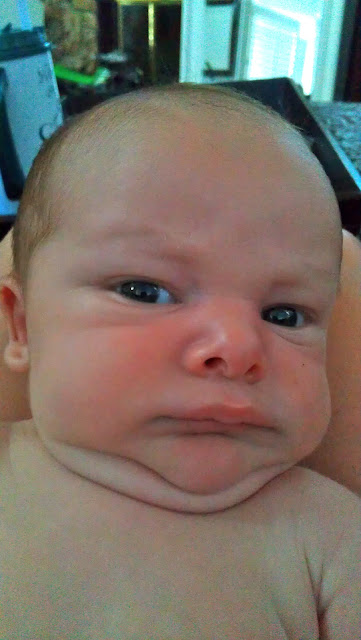 Cooper is just over a month old.  What a month it has been.  He spent the first week of life in the NICU.  At his first doctor's appointment after we left the NICU, he had already gained back his lost weight and was doing really well.

Parker had a tough time with reflux and spitting-up and I had a feeling Cooper would be the same way.  I was right.  Not only does he have reflux issues, but he is one of the lucky 25% of babies that has colic.  He spends about an hour every morning just crying and another two in the evening.  It makes for very rough days.  He's just unhappy for those few hours.

We are trying probiotics and I am also eliminating a few foods from my diet to see if anything will help.  Let's hope that someone catches and works soon.

He has been a blessing so far and Parker really loves him, so despite his daily bad attitudes, I think we are going to keep him.  How could you not just love this face?

the Worleys
stockton, ca
Kevin and I are enjoying married life in Stockton. We are settled and life here really feels like home.We are the parents of two wonderful little boys, Parker and Cooper and our sweet baby girl, Hadley.

This is our life: the good, the bad and the boys.